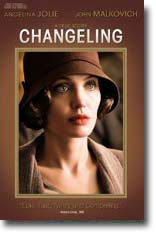 Clint Eastwood’s mastery as a director is demonstrated in Changeling, a film based on a shocking but all-too-true story about child abduction and police corruption in 1920s Los Angeles. Single mother Christine Collins (Angelina Jolie) finds her 9-year-old son,

Walter, missing when she returns home from work one day. She files a report with the Los Angeles Police Department, an outfit that was wildly unpopular at the time. A crusading pastor played by John Malkovich decries the force as “violent and corrupt,” adding that “our protectors are our brutalizers.”

When a child roughly matching Walter’s description turns up in Illinois five months later, the LAPD, intent on salvaging its tattered reputation, is only too eager to claim that he is Collins’ missing child. Little matters that he’s three inches shorter, is circumcised (Walter wasn’t), and fails to pass muster with Walter’s dentist, schoolteacher, and others; the cops, in particular the odious Captain J.J. Jones (Jeffrey Donovan), insist that the mistake is Christine’s, not theirs.

What follows is almost too nightmarish to believe–except that it actually happened. Exasperated by Collins’ continued claim that “Walter” is a fraud, they trot out a doctor to reinforce the bogus ID, declare her unfit as a mother, and finally have her committed to a local psychopathic ward.

Through it all, Collins, bolstered by the pastor and thousands of outraged Angelenos, refuses to sign a document that would exonerate the police for their egregious error. Changeling is a powerful film, with a realistic period feel, a wonderfully muted vibe and color palette, and an understated score by Eastwood himself.