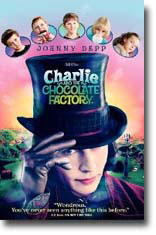 This fantasy adventure from director Tim Burton brings his vividly imaginative style to the beloved Roald Dahl classic Charlie and the Chocolate Factory, about eccentric chocolatier Willy Wonka (Johnny Depp) and Charlie, a good-hearted boy from a poor family who lives in the shadow of Wonka’s extraordinary factory.

Long isolated from his own family, Wonka launches a worldwide contest to select an heir to his candy empire. Five lucky children, including Charlie, draw golden tickets from Wonka chocolate bars and win a guided tour of the legendary candy-making facility that no outsider has seen in 15 years. Dazzled by one amazing sight after another, Charlie is drawn into Wonka’s fantastic world in this astonishing and enduring story.

Depp’s pale, androgynous Wonka led some to suspect he was channeling Michael Jackson, but Burton’s film is too expansively magnificent to be so narrowly defined. While preserving Dahl’s morality tale on the hazards of indulgent excess, Burton’s riotous explosion of color provides a wondrous setting for the lessons learned by Charlie Bucket (Freddie Highmore), as he and other, less admirable children enjoy a once-in-a-lifetime tour of Wonka’s confectionary wonderland.

Elaborate visual effects make this an eye-candy overdose, such as Oompa-Loompas (Deep Roy), and the film’s underlying weirdness is exaggerated by Depp’s admirably risky but ultimately off-putting performance. Of course, none of this stops Burton’s Charlie from being the must-own family DVD of 2005’s holiday season, perhaps even for those who staunchly defend Gene Wilder’s portrayal of Wonka from 34 years earlier.