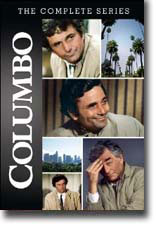 Columbo is much more than any other show! Despite my opening criticisms, this is a show that one can become totally engrossed in. It keeps you engrossed from beginning to end- not with gimmicks, like action or gore, but with intrigue.
Yes, I said intrigue- even though we know at the start who committed the crime; the intrigue enters when we try and fathom how Columbo will solve it! Truly a brilliant concept for a show, and so well executed in this series. In addition, there is always amusement/humor at Columbo’s mannerisms; attire; car; dog, etc.
Legendary Peter Falk is a four-time Primetime Emmy Award-winner for his iconic role as the beloved, trenchcoat-wearing Police Lieutenant Columbo. Columbo is the landmark series that inspired a genre. And now, for the first time ever, all 69 episodes from its seven seasons and all 24 television movies are together in this 34-disc anthology.
Every criminal, every innocent victim (and some not-so-innocent ones), and every wily deduction are here in one definitive collection. Seemingly befuddled but always brilliant, the cigar-chomping detective will have you following the clues and asking “just one more thing” until the last case is cracked.
This series is a treasure trove of past acting greats whose names most generation-Xers such as myself may have heard of, but we have never really had the chance to see perform. These were actors and actresses who took the craft seriously and had some real talent- unlike most of the ilk that inhabits Hollywood today.