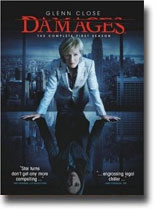 Set in New York’s world of high stakes litigation, Damages follows the lives of Patty Hewes, the nation’s most revered and most reviled litigator, and her bright, ambitious protégée Ellen Parsons as they become embroiled in a class action lawsuit targeting Arthur Frobisher, one of the country’s wealthiest CEOs. As Patty battles Frobisher and his attorney, Ellen learns what it takes to win at all costs, and that lives, not just fortunes, are at stake.

Smart, sleek, and more than a little wicked, the Golden Globe-winning series Damages proves that legal programs don’t have to follow a well-worn formula in order to prove completely addictive. In fact, the show steers clear from nearly all courtroom drama clichés over the course of its 13 episodes, and hews closer to classic film noir with the slowly-spun web of deceit that is woven around fresh-scrubbed lawyer Ellen Parsons (Rose Byrne).

After joining the legal firm headed by uber-powerful litigator Patty Hewes (Glenn Close, who won a Golden Globe for her performance), Parsons lands a career-making case–a class-action lawsuit against millionaire Arthur Frobisher (Golden Globe nominee Ted Danson)–but discovers that digging deeply into the case not only reveals layers of corruption, cover-up, and potential scandal, but places her own life in jeopardy as well.

Smart, mature writing and note-perfect performances, most notably by Danson as the perverse and complex Frobisher, but also by Tate Donovan, Zeliko Ivanek, Peter Facinelli, Philip Bosco and Peter Reigert, make Damages a genuine pleasure for law and mystery show fans, but also those craving a challenging series that delivers water cooler chat material in every episode.

The three-disc set includes all 13 episodes as well as deleted scenes; among the featured extras are two choice commentaries, one with Close, the Kesslers and Zelman, and the other with Ivanek and the creators, both of which are chock-full of production and technical insights. A 30-minute making-of featurette, discussions about the characters by the creators, and a guide to class-action lawsuits rounds out the fine supplemental features.