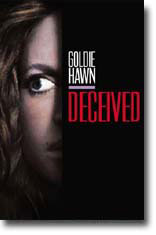 While some might call the plot twists of this thriller improbable, the tension and build to the film creates a momentum that carries the viewer to the incredibly scary climax. Doing less than 30 million in box office, this was not a big hit; but it is a film that holds up remarkably well many years after its release.

Goldie Hawn does an excellent job as Adrienne Saunders, a woman who seems to have it all with a beautiful child and happy marriage. Her husband Jack (John Heard) seems like the All-American father. Then when a colleague of her husband’s gets murdered, clue upon clue seems to fly up in her face until Adrienne has to confront her husband. Then Jack mysteriously dies in a car accident.

Director Damian Harris who seems to thrive on thrillers does an amazing job of having event build upon event. The supporting cast of characters do a great job from Jack Saunders’ sister to Paul Sullivan’s mother.

While this may not be a perfect film, it is a thriller that packs a wallop. Goldie Hawn delivers an understated and believable performance as the terrorized and deceived wife. This is a film worth discovering or revisiting a little over a decade after its release.