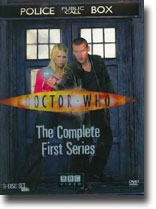 Christopher Eccleston’s Doctor is wise and funny, cheeky and brave. An alien and a loner, his detached logic gives him a vital edge when the world’s in danger. But when it comes to human relationships, he can be found wanting. That’s why he needs Rose. From the moment they meet, the Doctor and Rose understand and complement each other. As they travel together through time, encountering new adversaries, the Doctor shows her things beyond imagination.The venerable science fiction program Doctor Who returned to British televisions in 2005 after a 15-year absence and delighted the majority of fans and critics with its adherence to the adventure and charm of the original series while making admissions for a new generation of viewers (hipper editing and score, CGI effects).

The new series proved so popular that the BBC agreed to revive the program for second and third seasons–though without Eccleston, who has since been replaced by David Tennant. This six-disc set comes with all 13 episodes plus the battery of supplemental features now customary to all Doctor Who DVD releases.

Eccleston is very engaging in the title role, bringing a manic curiosity tempered by occasional bouts of gravity (which befit a personality with a long and dramatic a lifespan as the Doctor’s) that hew closely to the (arguably) most popular Doctor, Tom Baker. Piper is equally adept as department store clerk Rose–she’s afforded more of a back story than most of the Doctor’s sidekicks have received in the past, and she more than handles her own alongside Eccleston.

Highlights among the 13 episodes include the season opener, “Rose” (which sees the return of an old foe, the Autons, and their controlling force, the Nestene Consciousness); the revamped Daleks in “Dalek” and the two-parter “Bad Wolf” and “The Parting of the Ways”; a trip to Victorian England to aid Charles Dickens in “The Unquiet Dead,” and of course, the arrival of the tenth Doctor at the conclusion of the action-packed “Parting of the Ways.” The episodes strike the right blend of quirk, excitement, and imagination, thanks largely to the engaging performances and the guidance of Davies, whose admiration for the show and its history is evident throughout.

Supplemental features–and there are many–including commentary on all 13 episodes by members of the cast and crew, including Piper and Davies; numerous making-of featurettes, including a profile of Davies; a video diary by Piper; an interview with Eccleston, and best of all, a glimpse at the 60-minute Christmas special, “The Christmas Invasion,” which picks up where the series concludes. Who fans won’t be disappointed.

Character to watch: David Tennant as The Doctor.