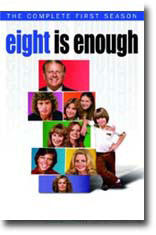 As the series begins, oldest son David (Mark Hamill), a construction worker, leaves the nest, but there would be a few cast changes by the second episode. Notably, Grant Goodeve would replace Hamill, while Willie Aames took over as Tommy. With women’s lib in full effect, the Bradford women spend much of these nine episodes trying to find their way in a changing world: Joan takes up photography, Susan (Susan Richardson) goes on a ski trip with a male coed, and Mary (Lani O’Grady) opposes her father during a newspaper strike.

Once you get past the flared jeans and wide lapels, Eight Is Enough holds up surprisingly well, since the primary concerns are timeless. If the acting can be uneven, the chemistry between cast members papers over the cracks. Sadly, Hyland only filmed four episodes due to illness (she passed away in 1977). In the second season, Betty Buckley stepped in as the newest member of the Bradford clan.