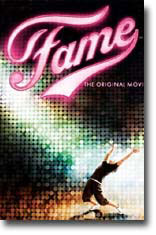 At the New York City High School for the Performing Arts, students get specialized training that often leads to success as actors, singers, and other artists. This movie follows four students from the time when they audition to get into the school, through graduation. They are the brazen Coco Hernandez (Irene Cara), shy Doris Finsecker (Tresa Hughes), sensitive gay Montgomery MacNeil (Paul McCrane), and brash, abrasive Raul Garcia (Barry Miller).

The movie then spans four years among the students and teachers lives told as four seperate consecutive 30-35 minute episodes each spanning over several months. During their freshman year, the new students learn on the first day of classes that academics are weighted equally with performance. Leroy clashes with Mrs. Sherwood in English class over his reluntance to learn every new topic.

The naive and innocent Doris is overwhelmed by the energy and spontaneity in the lunchroom and flees, meeting Montgomery. Doris and Montgomery become friends, and Doris worries that she’s too ordinary against the colorful personalities of the other students. As the year progresses, Coco tries to convince Bruno to book performing gigs with her. During a night on the town, Coco tells Bruno of her belief that she’s “doing my last dance on this dark little planet” so it has to be spectacular.