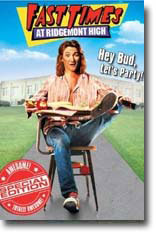 The film follows a group of high school students growing up in southern California, based on the real-life adventures chronicled by Cameron Crowe. Stacy Hamilton (Leigh) and Mark Ratner (Brian Backer) are looking for a love interest, and are helped along by their older classmates, Linda Barrett (Cates) and Mike Damone (Rober Romanus), respectively.

The center of the film is held by Jeff Spicoli (Penn), a perpetually stoned surfer dude who faces off with the resolute Mr. Hand (Ray Walston), who is convinced that everyone is on dope.

One of the classic high school movies, Fast Times spawned a slew of teenage talent on the big screen, but no one was more memorable in this movie than Penn as Spicoli. Amy Heckerling cuts out a slice of Southern Californian life from a San Bernardino high school that shows both honor students and misfits alike.

While the signature moments belonged to Spicoli, there were many other great scenes such as the ongoing burger war in which Reinhold finds himself on the short end of the spatula. Meanwhile his little sis, a seemingly innocent Leigh, experiments with dating and sex with an amusing pair of misfits, Backer and Romanus.

Phoebe Cates tries to set her young prodigy straight but to no avail. Forest Whitaker even has a significant moment in this movie as the bruising defensive lineman who takes out the destruction of his prized car on the opposing team. Little did he know that Spicoli had a hand in it. But, it is the hilarious relationship between Spicoli and Mr. Hand that steals the show. Fast Times may appear a bit dated, but it hasn’t lost any of its humor.