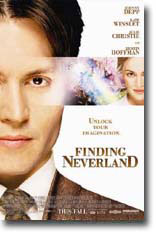 Sweetness that doesn’t turn saccharine is hard to find these days; Finding Neverland hits the mark. Much credit is due to the actors: Johnny Depp applies his genius for sly whimsy in his portrayal of playwright J. M. Barrie, who finds inspiration for his greatest creation from four lively boys, the sons of widow Sylvia Llewelyn Davies (Kate Winslet, who miraculously fuses romantic yearning with common sense).

Though the friendship threatens his already dwindling marriage, Barrie spends endless hours with the boys, pretending to be pirates or Indians–and gradually the elements of Peter Pan take shape in his mind.

The relationship between Barrie and the Llewelyn Davies family sparks both an imagined world and a quiet rebellion against the stuffy forces of respectability, given physical form by Barrie’s resentful wife (Radha Mitchell) and Sylvia’s mother (Julie Christie).

This gentle silliness could have turned to treacle, but Depp and Winslet–along with newcomer Freddie Highmore as one of the boys–keep their feet on the earth while their eyes gaze into their dreams. Also featuring a comically crusty turn from Dustin Hoffman as a long-suffering theater producer.

Finding Neverland is a wonderful family film. There is truly a sense of wonder about J.M. Barrie and his imagination which created Neverland. His friendship with the Davies comes off as genuine and heartfelt and entirely natural.

Depp is much more restrained here than in most of his other movies, but he still is able to shine through with a quirky personality that feels appropriate to Barrie. Finding Neverland is a very imaginative movie, beautifully shot, with enough scenes of Barrie’s imagination.