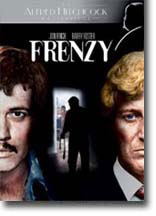 Alfred Hitchcock’s penultimate film Frenzy, written by Anthony Shaffer, this delightfully grisly little tale features an all-British cast minus star wattage, which may have accounted for its relatively slim showing in the States. Jon Finch plays a down-on-his-luck Londoner who is offered some help by an old pal (Barry Foster).

In fact, Foster is a serial killer the police have been chasing–and he’s framing Finch. Which leads to a classic Hitchcock situation: a guiltless man is forced to prove his innocence while eluding Scotland Yard at the same time.

Spiked with Hitchcock’s trademark dark humor, Frenzy also features a very funny subplot about the Scotland Yard investigator (Alec McCowen) in charge of the case, who must endure meals by a wife (Vivien Merchant) who is taking a gourmet-cooking class. The film revolves around a series of grisly strangulations of women occurring around London that have the police totally baffled. The killer’s choice is a necktie, which pretty much leaves the door wide-open, since almost every man there wears a necktie.

Frenzy was a homecoming of sorts as it was Hitch’s first film shot in the UK since he left during the 40’s. Hitch’s droll and dark sense of humor change what could have been a run of the mill thriller into a minor masterpiece.

The best bits in Frenzy are every bit as startling and powerful as those in Rear Window, Vertigo and North by Northwest. Although his wife Alma’s heart attack couldn’t have informed the pre-production stages of the script and film, it certainly had an impact on the atmosphere captured in the film. There is an underlying darkness here only hinted at before, most notably in The Birds, Vertigo and Marnie.