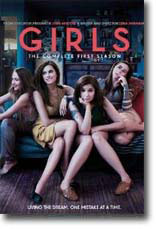 Girls is centered around four young women trying to navigate the pitfalls on the way to responsibility and adulthood. The characters ably showcase a combination of post-collegiate ennui and over-educated (and pseudo-intellectual) entitlement. Set in a fashionable New York City young, artistic and urban environment, the show’s sardonic tone and cultural critique really speak to this specific population.

An aspiring writer and her three friends, all in their early 20s, together try to make sense of what life has in store for them after living in New York for two years. They’re not sure what they want, or who they want it from, and the picture isn’t getting any clearer. Hannah (Lena Dunham) thinks she has what it takes to be a successful writer, if only she would write something.

Hannah wants a boyfriend without dealing with an actual relationship, and she wants a job without having to work. Marnie (Allison Williams) is Hannah’s best friend, a Type A personality who has a serious boyfriend and an actual job. Jessa (Jemima Kirke) is a devil-may-care bohemian whose apparent lack of fear hides her own kind of insecurity.

Her cousin, Shoshanna, is an NYU student who would love nothing more than to experience a “Sex and the City” lifestyle. The others tend to underestimate Shoshanna (Zosia Mamet), but she proves to be a sharp source of wisdom.

At the end of the day, you might not remember all of the antics these girls got up to, but you probably will remember the progressive nature of the relationships between the characters. Girls is definitely a show worth checking out. Try it with an open mind, you might be pleasantly surprised.