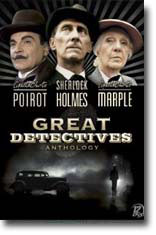 Theres a murderer on the moors. Terror on the train. Villains in the village! Only the worlds greatest deductive minds can save the day. Fortunately, Arthur Conan Doyles Sherlock Holmes and Agatha Christies Hercule Poirot and Miss Jane Marple are together, for the first time ever, to confront their most confounding cases in the Great Detectives Anthology.

Literatures greatest sleuths are brought to life by the actors born to play the roles. As portrayed by Peter Cushing, the definitive Sherlock Holmes exercises his legendary deductive skills in five classic BBC productions, including The Hound of the Baskervilles,

A Study in Scarlet and The Sign of Four. Meanwhile, Dame Agathas diminutive detective, Hercule Poirot, portrayed with fastidious elegance by the inimitable David Suchet, applies his little grey cells to ferret out the cause of a Death on the Nile and solve the Mystery of the Blue Train, among other Christie classics.

Rounding out the trio, Joan Hickson received an Order of the British Empire for her portrayal of the brilliant spinster Miss Jane Marple, who is here to untangle the riddles of the Murder at the Vicarage, The Mirror Crackd from Side to Side and many more.

SHERLOCK HOLMES:
DISC 1: The Hound of the Baskervilles
DISC 2: A Study in Scarlet / The Boscombe Valley Mystery
DISC 3: The Sign of Four / The Blue Carbuncle

MISS MARPLE:
DISC 4: The Moving Finger / At Bertrams Hotel
DISC 5: Murder at the Vicarage / Nemesis
DISC 6: A Caribbean Mystery / The Mirror Crackd from Side to Side
DISC 7: Sleeping Murder / 4:50 from Paddington

HERCULE POIROT:
DISC 8: Death on the Nile
DISC 9: The Mystery of the Blue Train
DISC 10: Taken at the Flood
DISC 11: After the Funeral
DISC 12: Cards on the Table

What can you see about the portrayals of these classic sleuths? David Suchet as Poirot can never be matched or topped.He is Poirot. It is a part he was born to play and the episodes chosen here are a great example of his work and Agatha Christie’s stories of Poirot. The same can be said about Miss Marple played by Joan Hickson. Many actresses have played her,but this is the ONE. She is the actress and this is the part that got me watching Miss Marple on PBS back in the 80’s and she is Miss Marple in my head to perfection. Both Miss Hickson and Mr. Suchet can not be topped for these roles.
Sherlock Holmes portrayed by Mr. Cushing is pretty good,these are the TV versions from I believe the 70’s and don’t have the quality of the other 2 sleuths. Not to berate Mr. Cushing he is an excellent actor,but to me he is always Dr. Von Helsing or Dr. Frankenstein. I can give the 2nd best rating as Sherlock and since I am a Sherlock collector that is very high. Buy this set if you are starting out on these sleuths,if you are reliving watching them years ago or if you just want a sample set to give as a gift. For the price well worth it.