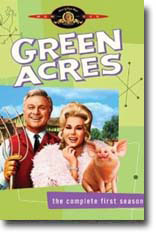 Eddie Albert spent six seasons appealing to the whacked out citizens of Hooterville to behave in a rational and orderly manner. Naturally, he got just what he deserved–the gradual erosion of his own mental stability. Aficionados of this show like to call it surreal. All one can add to that, to paraphrase the classic title song, is that DVD is the place for Green Acres to be.Hooterville may have been condemned by critics as a vast wasteland, but as the first season demonstrates, it provides fertile ground for bizarre behavior for a gallery of classic characters who rival the residents of Twin Peaks. “Oliver Buys a Farm,” the series pilot, is a comparatively tame episode that gives little hint of the weirdness to come.

Among the season’s other episodes, in “The Day of Decision,” all of Hooterville wonders whether “she will” or “she won’t” as Lisa chooses between life on the farm or returning to New York. In “Never Look a Gift Tractor in the Mouth,” Hooterville is beginning to look like Peyton Place when Doris Ziffel (Barbara Pepper) becomes convinced that her husband Fred (Hank Patterson) and Lisa are having an affair. “Lisa Bakes a Cake,” in which Lisa lists Oliver in the phone book as an attorney, is about as flat and heavy as one of Lisa’s infamous creations.

One of the things I really love about the show is the warm and loving relationship shown between main characters Oliver and Lisa. No matter how much at odds they may be during an episode, in the end it is their love for each other that makes everything alright and keeps them together in the face of every outlandish adversity that “Hootsersville” can throw at them.