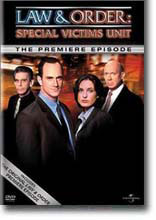 Originally called Sex Crimes, executive producer Dick Wolf wisely opted for something less lurid when the second in the inexhaustible Law & Order franchise hit the air in 1999. Still, as the opening voiceover makes clear, the “sexually based offenses” investigated by New York’s Special Victims Unit can be “especially heinous.” Wolf penned series premier “Payback,” which sets the scene, but not the tone.It’s a lively, if uneasy mix between horror (rape) and comedy (risqué banter).

As the first season progressed, humor would be written out altogether (leaving Richard Belzer’s Homicide-derived John Munch with increasingly less to do), and less emphasis would be placed on the home lives of this “elite squad of dedicated detectives.” Mostly, “Payback” introduces us to the unit, centering around partners

Olivia Benton (Mariska Hargitay) and Elliot Stabler (Christopher Meloni). For two people with so little in common, they make a terrific team–arguably one of TV’s best. Stabler is married with four children; Benton is single and her closest relationship is with her mother (Elizabeth Ashley).

While Stabler can get a little rough with suspects, Benton tends to over-empathize with the victims. They report to the no-nonsense Captain Cragen (Dann Florek). Like the parent program’s Lenny Briscoe, he’s a recovering alcoholic. Dean Winters and Michelle Hurd round out the rock-solid cast.