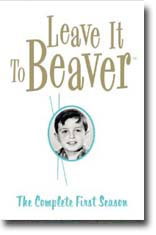 Leave It To Beaver premiered on CBS-TV on Friday, October 4, 1957, and continued on network TV for a total of six seasons, finishing its 234-episode run in 1963. Each of the six seasons consisted of exactly 39 episodes, a hefty number by today’s seasonal standards. CBS carried the show for the first season only. For the final five years, Leave It To Beaver was a part of the ABC-TV schedule.
The storylines used for “Beaver” were always very simple and uncomplicated, which is probably why it’s so charming and appealing. No major earth-shattering disasters ever befall the Cleavers.

Nobody ever gets hurt (except an occasional scraped knee), the parents (Ward and June) rarely fight about anything serious and never threaten to leave each other (like you might see on a show today), and above all, these characters really seemed to care about each other, without getting overly sappy and sentimental about it.

All of these traits helped make “Leave It To Beaver” what it was each week in 1957, and what I believe it remains today: just a good, clean, fun, uncomplicated half-hour of entertaining television.Starring Jerry Mathers as “Theodore (Beaver) Cleaver”, Tony Dow as his brother “Wally”, Barbara Billingsley as “June”, and Hugh Beaumont as “Ward”, the excellent cast of Leave It To Beaver was a well-chosen group in my opinion. While it’s true, I suppose, that the acting was a bit on the “stiff” side on many occasions, I still think that this ensemble did quite well on this show. A sense of true believability and realism finds its way quite comfortably into each of these episodes.

Toss into this cast grouping the very funny Richard Deacon, who portrayed Ward’s friend and co-worker, “Fred Rutherford”, plus Ken Osmond as the ever-sarcastic “Eddie Haskell”, Frank Bank as the wimpish (but always likeable) “Lumpy Rutherford”, Rusty Stevens as “Larry Mondello”, and all of Beaver’s and Wally’s other various friends, classmates, and schoolteachers, and you’ve got a really first-rate supporting cast of characters to build stories around.