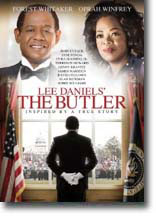 The Butler tells the story of a White House butler who served eight American presidents over three decades. The film traces the dramatic changes that swept American society during this time, from the civil rights movement to Vietnam and beyond, and how those changes affected this man’s life and family. Forest Whitaker stars as the butler with Robin Williams as Dwight Eisenhower, John Cusack as Richard Nixon, Alan Rickman as Ronald Reagan, James Marsden as John F. Kennedy, Liev Schreiber as Lyndon B. Johnson, and many more.

The film centers on the life of Cecil Gaines (Forrest Whitaker), who grew up on a plantation but spent most of his career in service at the White House. To his son Louis (David Oyelowo), Cecil is nothing more than a representative of “Uncle Tom” culture, spending his life in willing thrall to the white man.

Cecil manages to provide for his family and carve out a career; it is only late on in his life, when President Ronald Reagan offers him an opportunity to savor something that he has never previously experience, that he understands how little his masters have changed, ideologically speaking, since the days of racial segregation. This is the film’s “aha-moment” – from then on Gaines devotes himself to the cause of equal rights.

The film contains a clutch of memorable performances: Oprah Winfrey is quite admirable as Gaines’ wife Gloria, supported by Terrence Howard and Cuba Gooding Jr., in supporting roles. Whitaker is quite simply brilliant in the title role; he ages gracefully while always sustaining his self-respect.