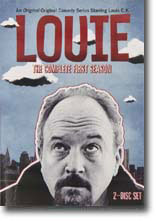 Life can be hectic for a newly single father and successful stand-up comedian, just ask Louie, a fictionalized version of comic Louis C.K., who portrays the character. From his first meeting of the PTA to dating again and navigating the big city with two small children, the comic shares pieces of his day with an appreciative audience during his stand-up gigs. The series features appearances by a number of stand-up comedians appearing in the show as fictionalized versions of themselves.

He is a single father living with his two school-going daughters. Episodes focus on events in his everyday life, and are bookended by clips from his stand-up routine. Louie is the only regular in the show, and even his daughters are portrayed by more than one actor.

The style of humor is often sexual and racist, with occasional use of vulgar language. Louie exercises total freedom in the episodes he creates and there are few boundaries established throughout the show, with episodes dealing with such diverse topics as picking up the kids from school to doing drugs at his next-door neighbor’s. Most of his stand-up routines mirror his real life and often have little or no association with the topic of the episode.

Louie shares similarities with early Woody Allen films. It’s a lazy comparison in many ways; both are comedians based in New York. Their humor is quite different, but there’s a strong similarity in tone. The music, the New York setting, the dealings with human nature, etc. Allen’s humor and dialogue is different from Louis’, but the most substantial difference is simply that Allen’s comedy is more refined and sophisticated.