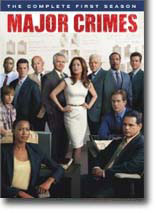 The detectives in the Los Angeles Police Department’s Major Crimes division are still reeling from the departure of Brenda Leigh Johnson and the realization that Captain Raydor is now in charge. Unlike their previous chief, Raydor is determined to lead the department with a more team-oriented approach, sharing the credit with the people with whom she works.

Raydor’s hardest job, however, will be gaining the full trust and confidence of her detectives, who aren’t quick to forget her long history of internal investigations targeting them and their previous boss. Especially troublesome is Provenza, who has a difficult time taking orders from someone he doesn’t think knows as much as he does.Viewers bereft at the demise of The Closer will find plenty to like about Major Crimes, another top-notch cop drama from TNT. The connection is no coincidence; with The Closer shutting down following the departure of Emmy winner and star Kyra Sedgwick after seven seasons, the producers were charged with creating what one of them calls “a similar franchise with a new heart,” and this is it.

A significant number of the cast members from the earlier show are back, but there are notable changes as well, most notably the replacement of Sedgwick’s Brenda Johnson by Captain Sharon Raydor (Mary McDonnell). Hers is not an easy transition. Coming from the Los Angeles Police Department’s dreaded “Force Investigation Division,” Raydor, who also appeared in various Closer episodes, is distrusted and outright disliked by most of her new colleagues, especially old-school lieutenant Louie Provenza (G.W. Bailey).

This internecine conflict is a distraction, to say the least, as Raydor is obliged to spend much of the season trying to win the others over, all while working some nasty murder cases (involving kidnapping, gunrunning, human trafficking, military veterans-turned-robbers, a serial rapist, and other unsavory business). And that’s not all. Raydor, long estranged from her husband and the mother of grown children, takes a cynical, parentless teen boy (Graham Patrick Martin) who witnessed a killing under her wing, a story arc that continues across the season’s 10 episodes.

What’s more, there’s the bigger issue of the justice system itself: with the city of Los Angeles having major money problems, the police are not-so-gently encouraged to cut deals with criminals so as to preclude expensive trials, a mandate that does not sit well with the rank and file. The show has its light moments (when a fitness trainer named Chad is found suspended upside down from an apparatus, Provenza immediately dubs him “hanging Chad”) but there’s enough grit to keep police procedural lovers satisfied.