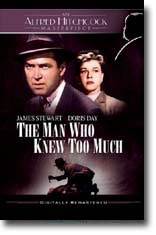 Alfred Hitchcock’s 1956 remake of his own 1934 spy thriller is an exciting event in its own right, with several justifiably famous sequences. James Stewart and Doris Day play American tourists who discover more than they wanted to know about an assassination plot. When their son is kidnapped to keep them quiet, they are caught between concern for him and the terrible secret they hold. When asked about the difference between this version of the story and the one he made 22 years earlier, Hitchcock said, “Let’s say the first version is the work of a talented amateur and the second was made by a professional.”

Indeed, several extraordinary moments in this update represent consummate filmmaking, particularly a relentlessly exciting Albert Hall scene, with a blaring symphony, an assassin’s gun, and Day’s scream. When Queen Elizabeth knighted Sir Alfred, he chose the Albert Hall sequence from this film to be the capstone of the film excerpts presented at the ceremony.

Naturally there are some events that may be commonplace in the mid 1950’s that you would never see today. Specifically, handing a child off to a stranger you had just met. In this version the child is a boy of about 9, where the original featured a girl of about 13. This movie features Day in a rare dramatic role, although she plays a former professional singer and does get to use her singing voice in the movie.

One of the greatest casting coups in Hitchcock history has Doris Day playing the anguished mother and wife of the man who knew too much, and although the story’s title names the man, it is the wife’s story all the way. She is the emotional center of the story; it is her intuitions, her suspicions, her deductions that propel the narrative, and Doris Day plays the part to a fare-thee-well offering a performance which sizzles through a gamut of emotions from the lighthearted fun of dueting with her little boy.

The film is pure Hitchcock. The edge of your seat suspense, the trademark staircase scene, the brilliant camera angles, and all the special touches that make it definitive Hitch. Along with his other films from the mid-1950s to 1960 (including Vertigo, Rear Window, and Psycho), The Man Who Knew Too Much is the work of a master in his prime.