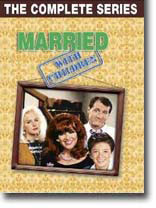 When Married… with Children debuted on Fox TV on April 5, 1987, the grungy sitcom became an instant flagship for Rupert Murdoch’s upstart network. Married… with Children was meant ro be a trashier, raunchier, and far more cynical view of the American nuclear family. But it turned out the series actually fell into other caustic-domestic entertainment traditions.The jokes were savage, key relationships were marked by ennui and indifference, and the Bundy family name couldn’t help but make one think of America’s most notorious, real-life serial killer at the time. Yet the show had a hint of Golden Age Hollywood gloss, a retro-screwball feel that one could detect in the snappy verbal warfare between husband Al Bundy (Ed O’Neill) and wife Peggy (Katey Sagal). The characters, and the show, eschewed sentimentality, which certainly opened the floodgates to comic cynicism but also kept a door ajar for moments of genuine sweetness.