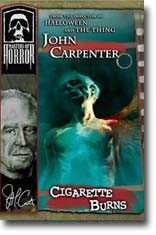 John Carpenter’s installment in the Masters of Horror cable-TV anthology series looks at the ominous, underground mystique surrounding a notorious 1970s horror classic, something Carpenter should know about. Cigarette Burns tracks the search for said opus, Le Fin Absolue du Monde, by the owner of a repertory theater (Norman Reedus) on behalf of a highly decadent millionaire collector (a role made for Udo Kier).

Film is magic. And in the right hands, it can be a weapon. For on-the-ropes movie programmer Kirby Sweetman (Norman Reedus), the holy grail of cinema, a legendary lost movie whose sole showing was rumored to have driven its audience to a homicidal frenzy. But as Kirby gets closer to the truth about the film, he’s sucked into a private hell of grisly hallucinations and brutal acts of violence. Now the only surviving print of the film is within his grasp… and the most horrific screening of all is about to begin.

The film, supposedly destroyed after it caused a riot at its only screening, causes viewers to turn into homicidal, cannibalistic maniacs. Even as Reedus gets on the trail of the lone existing print–listening to an interview with the director, looking at production stills–he begins to fall under its supernatural sway.

The basic idea, while a little film-schoolish, has intrigue, and the notion of a film critic (supposedly a follower of Pauline Kael, no less) driven to write millions of words about this one barely-seen movie is amusingly sinister.

This film was part of Masters of Horror, a television series that was an informal social group of international film writers and directors specializing in horror movies and an American television series created by director Mick Garris for the Showtime cable network. The first episode aired October 28, 2005 and the final episode aired February 2, 2007.