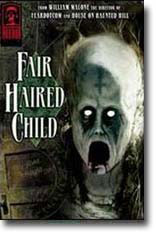 The ninth episode in the celebrated Masters of Horror series, The Fair Haired Child from director William Malone’s (Feardotcom, The House on Haunted Hill) finds Tara (Lindsay Pulsipher) kidnapped and thrown into a psychotic couple’s basement as a sacrifice to the Devil to bring their dead son, Johnny (Jesse Haddock), back to life.

Black-and-white flashbacks of the sick married couple watching helplessly as their son drowns are equally corny. Johnny, the child zombie haunted by guilt he feels for living at the expense of others, especially Tara’s, is the only interesting character. The fact that he is mute, communicating by scribbling thoughts into dirt, makes him eerily prophetic.

As a character, Johnny terrifies more than the stop-motion demon who steals teens away to the netherworld. Like House of Whipcord, this story of a basement-turned-torture chamber has appeal for its archetypal plot concept, and The Fair Hair Child has actors who convey real angst.

Not only is this movie artfully crafted and skillfully directed, the special effects are killer. Some scenes I immediately watched again, just to catch every second of the chilling graphics. The storyline is demented, twisted, and oh so evil.