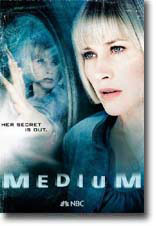 It’s not a coincidence that Medium represents not only Glen Gordon Caron’s best TV work since Moonlighting but also his most successful siege on the Nielsen ratings since the 1980s heyday of the latter show.
In an interview included in this five-disc set (which contain all 16 episodes from the first season, in addition to bountiful bonus features), the writer-director-producer confides that the series was partly inspired by films like Something Wild and Married to the Mob, in which director Jonathan Demme achieved a balance of what Caron calls “the serious and the frivolous.”
Medium also contains elements of Moonlighting and another Caron creation,1999’s underrated Now and Again; there are echoes of The Sentinel and The Dead Zone as well, not to mention a hefty dose of The Sixth Sense. So while it’s not what you’d call unique (then again, what on TV is?), Medium nevertheless provides engaging, rewarding entertainment.

Patricia Arquette stars as Allison DuBois, whose skills as both a medium (i.e., she sees dead people) and a psychic (she can fairly accurately read minds and predict future events) make her an invaluable help to the Phoenix district attorney (Miguel Sandoval).

Like most characters possessed of extraordinary powers, Allison isn’t entirely comfortable in her own skin; plagued by awful nightmares (one of which kicks off every episode), she tends to become cranky and depressed, has a hint of a drinking problem, and regularly gets into it with her supportive but skeptical husband, Joe (Jake Weber).

Those are the very characteristics that make the show consistently watchable. Although one might wish that she would find herself in real danger more often as she deals with everything from necrophiliac serial killers and air crashes to ghosts and child molesters, Caron focuses less on special effects and police procedure than on Allison’s humanity, including her efforts to balance work and family responsibilities (sub-plots involving her young daughters are usually effective, if sometimes a bit too cute).

It’s the stories and the writing that make Medium work; Caron, in fact, is the show’s real star. Well over an hour’s worth of bonus features include deleted scenes, commentary on some episodes, a couple of “making of” featurettes, and a look at the real-life Allison DuBois, whose powers are apparently every bit as impressive as her fictional counterpart’s.