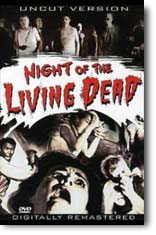 Barbra (Judith O’Dea) and her brother Johnny (Russell Streiner) travel by car from Pittsburgh to the countryside to visit the gravestone of their father in the cemetery. Out of the blue, they are attacked by a strange man and Johnny is murdered.

Barbra runs and releases the brake of Johnny’s car since the keys are in his pocket, and flees to an isolated farmhouse, where she locks herself inside. Barbra is in shock and soon she finds a man, Ben (Duane Jones), who is also escaping from the inhuman creatures and he reinforces the doors, windows and openings in the house.

Ben also finds a shotgun and a radio and they learn that the radiation from a satellite that was returning from Venus has somehow reactivated the brain of the dead. Then they find five humans hidden in the basement: Harry Cooper (Karl Hardman), his wife Helen (Marilyn Eastman) and their daughter Karen (Kyra Schon) that is sick; and Tom and his girlfriend Judy (Judith Ridley). Harry has an argument with Ben, since he believes that the basement is the safest place for them and Harry goes not agree.

It’s hard to imagine how shocking this film was when it first broke into the film scene in 1968. There’s never been anything quite like it again in terms of that type of impact, though there have been numerous pale imitations.

Part of the terror lies in the fact that it is shot in such a raw and unadorned fashion that it feels like a home movie, and is all the more authentic because of that. It draws us into its world gradually, content to establish a merely spooky atmosphere before leading us through a horrifically logical progression that we hardly could have anticipated.

The story is simple: Radiation from a fallen satellite has caused the dead to walk, and hunger for human flesh. Once bitten, you become one of them. And the only way to kill one is by a shot or blow to the head. We follow a group holed up in a small farmhouse who are trying to fend off the inevitable onslaught of the dead.

The tension between the members of this unstable, makeshift community drives the film. Night of the Living Dead establishes savagery as a necessary condition of life. Marked by fatality and a grim humor, the film gnaws through to the bone, then proceeds on to the marrow.