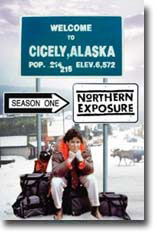 Whether it’s a snowy nude sprint down Main Street, the mysterious appearance of a long-lost relative, or the improbable death of yet another of Maggie’s boyfriends, life’s never dull in the remote hamlet of Cicely, Alaska.

The town develops its own offbeat personality as well, a Mayberry-meets-Twin-Peaks blend of Native mysticism, Aurora Borealis-induced dreams, unlikely tales of long-lost family members, and rumors of a Bigfoot-like creature known simply as “Adam.”

Northern Exposure provides a utopian escape–a place where life is interesting but never dangerous, everyone’s insightful, the mystical becomes real, and nobody’s burdened with a mundane 9-to-6 desk job. Cicely is a delightful place to visit, even if it’s only for an hour at a time.