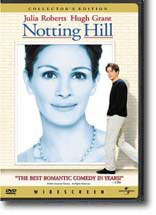 Every man’s dream comes true for William Thacker (Hugh Grant), an unsuccessful Notting Hill bookstore owner, when Anna Scott (Julia Roberts), the world’s most beautiful woman and best-liked actress, enters his shop. A little later, he still can’t believe it himself, William runs into her again – this time spilling orange juice over her. Anna accepts his offer to change in his nearby apartment, and thanks him with a kiss, which seems to surprise her even more than him.

Eventually, Anna and William get to know each other better over the months, but being together with the world’s most wanted woman is not easy – neither around your closest friends, nor in front of the all-devouring press.

At the height of her career finding the ordinary man in Notting Hill (an actual place in the UK) and falling in love with him. The unlikely story of travel bookstore owner getting involved with a mega-star actress is a fantasy but then it’s a movie… and their story is fun to watch. Their quirky romance struggles a bit while they try to find a common ground for the couple from opposite ends of the spectrum- and the movie tries to convey that even famous actresses have normal needs, too.

Like love and the need to belong in the world. The secondary characters like Spike (Rhys Ifans), Will’s flatmate, Will’s friends (Tim McInnerny, Gina McKee, Hugh Bonneville) and sister (Emma Chambers) just about steal the scenes. This movie is sweet, fun, poignant and a great happy ending. In the press conference scene at the end, when William and Anna stare at each other across the room, you can feel the love and happiness.