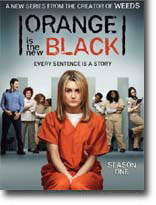 Piper Chapman (Taylor Schilling) is a public relations executive with a career and a fiance when her past suddenly catches up to her. In her mid-30s she is sentenced to a year in a minimum-security women’s prison in Connecticut for her association with a drug runner 10 years earlier. She is sentenced to fifteen months in prison after being convicted of a decade-old crime of transporting money for her drug-dealing girlfriend.

This Netflix original series is based on the book of the same title. Forced to trade power suits for prison orange, Chapman makes her way through the corrections system and adjusts to life behind bars, making friends with the many eccentric, unusual and unexpected people she meets.

The show is a complex character ensemble about the women she encounters. Filled with fascinating characters and spot-on performances, Orange is the New Black is certainly one of the better television programs because it serves much more in terms of story telling, emotional heft, and incisive humor than you have any reason to expect it will.