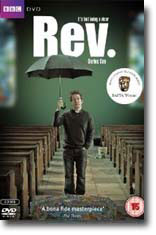 Rev. is a BBC series that the British television network describes, simply, as: “A sitcom about a vicar running a modern inner-city church, with a reluctant wife and a depleted, motley congregation.” But it’s so much more than that.

The series, which premiered in 2010, revolves around the Rev. Adam Smallbone (Tom Hollander), a Church of England vicar serving a down-on-its-luck parish in a dodgy part of East London called, inexplicably, St. Saviour in the Marshes.The humor (and the pathos) derives from Smallbone’s wistfully human, begrudgingly believing, perpetually struggling ministry as an urban priest facing the challenges of keeping the ship (of fools) afloat.

Adam is forever juggling financial, personal, and political pressures (of internal church politics, that is) while trying his best to best serve his “motley” crew and be a dutiful, loving husband to his solicitor wife, Alex.

This show is clever and funny and spiritually intriguing without being goofy, snarky, or facile. This is a very smart comedy, well written and it has a great cast. The series does not seem like a TV show – it has a very real feel to it.

Rev. is an edgy, often dark comedy that deals with the difficult issues involved with human interactions and conflicts, and the resulting emotions, from many diverse points of view. No matter how the dire the situations get the characters always seem to resolve or tolerate their differences, and to come together at the end of the show.

The collection of characters are played for humor, but they are also *very* recognizable to those who work in urban ministry. Both Adam and Alex’s marriage and Adam’s faith are beautifully nuanced. This show is not always laugh-out-loud funny or perfect, but I have seen nothing like it in authenticity and complexity.

Character to watch: Tom Hollander as The Reverend Adam Smallbone.