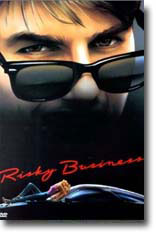 Little did Tom Cruise know that he would become a box-office superstar after he cranked up some Bob Seeger and played air guitar in his tidy whitey underwear. But there’s much more to this hit than the arrival of a hot young star.

Making a stylish debut, writer-director Paul Brickman crafted a subtle satire of crass materialism wrapped in an irresistible plot about a crafty high schooler named Joel (Cruise) who goes into risky business with the beguiling prostitute Lana (Rebecca De Mornay) while his parents are out of town.

Joel turns his affluent Chicago-suburb home into a lucrative bordello and forms a steamy personal and professional partnership with Lana, but only as long as the two can avoid the vengeful pimp Guido (Joe Pantoliano) and keep their customers happy. A signature film of the 1980s, Risky Business still holds up thanks to Cruise’s effortless charm and the movie’s timeless appeal as an adolescent male fantasy.

This 25th anniversary edition has some decent commentary, plus the famous “original” ending that the studios wanted replaced. The director should thank them. What was framed as a “happy” ending is what gives the film a point of view– that there is no punishment for amorality. The director’s preferred ending is weaker. The notion that somehow Joel and the hooker have a romantic future together is at odds with the cynicism of the film.