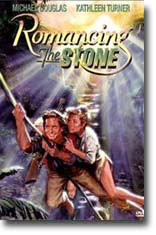 Director Robert Zemeckis had a hit with this romantic comedy that first teamed Michael Douglas, Kathleen Turner, and Danny DeVito. Turner steals the show from the guys, however, playing a pushy romance novelist who gets stuck among some dangerous figures in Colombia and has only a rumpled guide (Michael Douglas) as an ally. The chemistry between the stars is infectious.

Joan Wilder (Kathleen Turner) is a shy, mousy, albeit highly successful romance novelist who weeps at her own work when she finishes each novel (“Oh, God–that’s good!”) and, terrified to leave her Manhattan apartment, only dreams of the adventures that her fantasy character, Angelina, lives.

All this changes when she receives a letter from her sister’s recently deceased husband which contains a treasure map, and receives a phone call from her terrified sister held hostage by the same kidnappers (introducing the hilarious Danny Devito and Zack Norman, two partners-in-crime who happen to be cousins) who insists that Joni must deliver the map to her in Colombia. Reluctantly, the borderline agoraphobic Joni agrees, because it’s her sister.

After her bus, supposed to be routed to Cartagena but ends up crashing into a jeep filled with exotic birds in the middle of the mountainous nowhere, and she is ordered to give up her purse containing the map to the same man who murdered her husband, the evil Colonel/Minister of Antiquities/Deputy Commander of the Secret Police Zolo (chillingly portrayed by Manuel Ojeda) she is narrowly rescued by a soldier of fortune named Jack T. Colton (Michael Douglas). He becomes embroiled in the struggle for what is at the end of the map, the green, priceless emerald stone. They meet numerous crazy characters along the way and hijinx abounds.