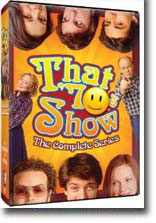 Eric Forman (Topher Grace) is a typical high school student growing up in Wisconsin in 1976 with his family and his friends. Together, they have the same kind of joys and sorrows that just about every teenager has while growing up. This show parodied many of the attitudes, events and fads of the 70s, along with those who grew up at the time.

That 70’s Show revolves the lives of several 17-year-olds living in Point Place, Wisconsin, 1976. The head of the group is Eric who lives under the authority of parents Red (Kurtwood Smith) and Kitty (Debra Jo Rupp). Living next door is girlfriend Donna Pinciotti (Laura Prepon) and her parents Bob (Don Stark) and Midge (Tanya Roberts).

The gang usually spends their time in Eric’s basement, thinking of their lives, parents, and futures, but they manage to get into funny adventures and mishaps along the way through their teenage lives. Back in the days of Led Zeppelin 8-tracks, Tab cola, and Farrah Fawcett posters, That ’70s Show continues to flashback to the times where bell bottoms were the hip thing.