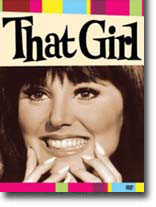 In the flapper era, Clara Bow was the It girl. In the liberated 1960s, Marlo Thomas was all That. Her groundbreaking character, Ann Marie, opened the door for a new generation of independent women on TV who just might make it after all. Ann was not a wife, mother, daughter, girlfriend, ditzy neighbor, sidekick, or fantasy object (neither genie nor witch). She was something new and contemporary, an aspiring actress who leaves home to pursue her career in New York City.”You did a wonderful job helping me grow up, but now I’m up,” she sweetly tells her overprotective parents (an Emmy-worthy Lew Parker and Rosemary DeCamp) in “Goodbye, Hello, Goodbye.” That Girl was not a total break from TV convention. In this inaugural season, she has a kinda kooky neighbor and Rhoda-antecedent, Judy (Bonnie Scott). And she has a boyfriend, magazine writer Donald Hollinger (Ted Bessell), whom she meets cute in the first aired episode, “Don’t Just Do Something, Stand There.”

Ann and Donald are one of TV’s great comedy teams. They have a delightful Barefoot in the Park-like chemistry, with Ann the vivacious, more free-spirited one, and Donald the more practical one. One of their best episodes is “Anatomy of a Blunder,” in which Donald suffers every disaster and indignity en route to meet Ann’s father for the first time.

Thomas was honored with a Golden Globe award for this season, and the series established her as “talented, unusual, a bright new face” (to quote the want ad Ann is desperate to answer in “You Have to Know Someone to Be an Unknown”).

One of the other kicks of reuniting with That Girl is the stellar roster of veteran character actors and future stars. Dabney Coleman, Bernie Kopell (Get Smart, The Love Boat), and Ronnie Schell (Gomer Pyle, U.S.M.C.) are regulars this season. Guest stars include Sally Kellerman and George Carlin in “Break a Leg,” Rob Reiner and “Terry” Garr in “This Little Piggy Had a Ball” (the inevitable bowling-ball-stuck-on-the-toe episode), and a pre-All in the Family Carroll O’Connor as an amorous opera singer in “A Tenor’s Loving Care.” That Girl is so-’60s, but as with The Dick Van Dyke Show, on which series creators Sam Denoff and Bill Persky previously worked, the literate, character-driven comedy holds up remarkably well.