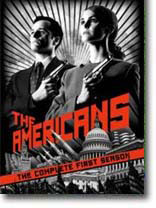 Secrets can be deadly in this suspenseful thriller about undercover Russian spies in 1980s Washington, D.C. Philip (Matthew Rhys) and Elizabeth Jennings (Keri Russell) seem to be a typical suburban couple, but they’re actually lethal KGB agents plotting to bring down America.

As the Cold War escalates, Philip and Elizabeth must take extreme measures to continue their mission and keep their true identities hidden. But when an FBI agent moves in across the street, they become ensnared in a pulse-pounding game of cat and mouse.

Astutely written, immaculately cast from top to bottom and always directed with the utmost flair it’s impossible not to marvel at the sheer cleverness of the whole enterprise. A cynic might proclaim how unbelievable is its premise but to them I would simply say, go look at the credentials of its executive producer (a former CIA officer) or do some rudimentary research into real-life spy Anna Chapman.

If you still feel you can’t suspend your disbelief, do you know what? It simply doesn’t matter (because you soon will.) The ingenuity of the plotting, the confidence of its execution, and not least the mesmerising performance of Keri Russell makes it impossible to look away. Drama this good improves the quality of your life.