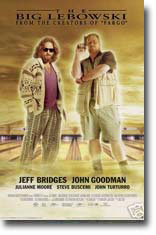 When “The Dude” Lebowski (Jeff Bridges) is mistaken for a millionaire Lebowski, two thugs urinate on his rug to coerce him into paying a debt he knows nothing about. While attempting to gain recompense for the ruined rug from his wealthy counterpart, he accepts a one-time job with high pay-off.

After the tight plotting and quirky intensity of Fargo, this casually amusing follow-up from the prolifically inventive Coen (Ethan and Joel) brothers seems like a bit of a lark, and the result was a box-office disappointment. The good news is, The Big Lebowski is every bit a Coen movie, and its lazy plot is part of its laidback charm. After all, how many movies can claim as their hero a pot-bellied, pot-smoking loser named The Dude (Bridges) who spends most of his time bowling and getting stoned?

The plot–which finds Lebowski involved in a kidnapping scheme after he’s mistaken for a rich guy with the same name–is almost beside the point. What counts here is a steady cascade of hilarious dialogue, great work from Coen regulars John Goodman and Steve Buscemi, and the kind of cinematic ingenuity that puts the Coens in a class all their own. Be sure to watch with snacks in hand, because The Big Lebowski might give you a giddy case of the munchies.

Character to watch: Jeff Bridges as Jeffrey Lebowski – The Dude.