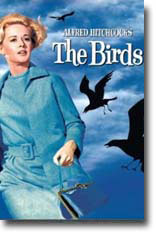 Vacationing in northern California, Alfred Hitchcock was struck by a story in a Santa Cruz newspaper: “Seabird Invasion Hits Coastal Homes.” From this peculiar incident, and his memory of a short story by Daphne du Maurier, the master of suspense created one of his strangest and most terrifying films.

The Birds follows a chic blonde, Melanie Daniels (Tippi Hedren), as she travels to the coastal town of Bodega Bay to hook up with a rugged fellow (Rod Taylor) she’s only just met. Before long the town is attacked by marauding birds, and Hitchcock’s skill at staging action is brought to the fore.

Beyond the superb effects, however, The Birds is also one of Hitchcock’s most psychologically complicated scenarios, a tense study of violence, loneliness, and complacency. What really gets under your skin are not the bird skirmishes but the anxiety and the eerie quiet between attacks.

The director elevated an unknown model, Tippi Hedren (mother of Melanie Griffith), to being his latest cool, blond leading lady, an experience that was not always easy on the much-pecked Ms. Hedren. Treated with scant attention by serious critics in 1963, The Birds has grown into a classic and–despite the sci-fi trappings–one of Hitchcock’s most serious films.

This stunning new DVD edition, this terrific movie at last gets the home video treatment it so richly deserves. The transfer is immaculately sharp and clear, letterboxed at the 1.85:1 ratio used for theatrical exhibition, and the mono digital sound is clean and vibrant. The letterboxing actually gives the film more breathing room, and some of the sequences, especially the complex technical passages such as the attack on the school, and the spectacular attack on the town, have a visceral punch that’s ratcheted up by the clarity of the digital image and sound.

Don’t be put off by the many sodium process shots that were necessitated by the demands of the screenplay; they are perfectly cut into the film, and give the movie a primitive realism that is perfectly in keeping with Hitchcock’s stylized view of reality. His films are all designed within an inch of their lives, and the audience is all the better for it.

The film, which by turns thrills (the various bird attacks) and amuses (the frequently bantering dialogue), is presented in all its widescreen glory — an important consideration for Hitchcock enthusiasts, given the director’s meticulous planning of his films’ visual compositions. “The Birds” features some great cinematography, a nerve-wracking soundtrack, and some finely wrought performances (particularly those of Jessica Tandy, Suzanne Pleshette and Ethel Griffies); all are well-served by the film-to-DVD transfer. There are a wealth of bonus features, including newsreel footage of Hitchcock and Hedren publicizing the film, an extensive stills gallery, and a fascinating behind the scenes production documentary.