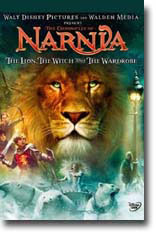 C.S. Lewis’s classic novel The Lion, the Witch, and the Wardrobe makes an ambitious and long-awaited leap to the screen in this modern adaptation. It’s a CGI-created world laden with all the special effects and visual wizardry modern filmmaking technology can conjure, which is fine so long as the film stays true to the story that Lewis wrote.

While this film is not a literal translation (it really wants to be so much more than just a kids’ movie) for the most part it is faithful enough to the story, and whatever faults it has are happily faults of overreaching, and not of holding back.

The Chronicles of Narnia: The Lion, the Witch, and the Wardrobe tells the story of the four Pevensie children, Lucy, Peter, Edmund, and Susan, and their adventures in the mystical world of Narnia. Sent to the British countryside for their own safety during the blitz of World War II, they discover an entryway into a mystical world through an old wardrobe.

Narnia is inhabited by mythical, anthropomorphic creatures suffering under the hundred-year rule of the cruel White Witch (Tilda Swinton, in a standout role). The arrival of the children gives the creatures of Narnia hope for liberation, and all are dragged into the inevitable conflict between evil (the Witch) and good (Aslan the Lion, the Messiah figure, regally voiced by Liam Neeson).

Director (and co-screenwriter) Andrew Adamson, a veteran of the Shrek franchise, knows his way around a fantasy-based adventure story, and he wisely keeps the story moving when it could easily become bogged down and tiresome. Narnia is, of course, a Christian allegory and the symbology is definitely there (as it should be, otherwise it wouldn’t be the story Lewis wrote), but audiences aren’t knocked over the head with it, and in the hands of another director it could easily have become pedantic.

The focus is squarely on the children and their adventures. The four young actors are respectable in their roles, especially considering the size of the project put on their shoulders, but it’s the young Georgie Henley as the curious Lucy who stands out. This isn’t a film that wildly succeeds, and in the long run it won’t have the same impact as the Harry Potter franchise, but it is well done, and kids will get swept up in the adventure. Note: Narnia does contain battle scenes that some parents may consider too violent for younger children.