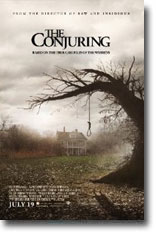 Paranormal investigators Ed (Patrick Wilson) and Lorraine Warren (Vera Farmiga) work to help a family terrorized by a dark presence in their farmhouse. Forced to confront a powerful entity, the Warrens find themselves caught in the most terrifying case of their lives.

The Conjuring is set in America during the 1960s. The film follows the real case-files of the Warrens who work against supernatural elements trying to possess the living, in this case the Perron family. The Warrens face a terrifying battle against a demon unwilling to leave and bent on wreaking havoc.

This film presents a nostalgic era before technology ruled the home roost (and the horror film), when a lonesome haunted house out in the sticks, and a creative eye for fear could hold the audience. The film creates a haunting atmosphere set around childhood themes; using games, toys and innocence to project the violence of this sinister entity. The film had both families fighting evil and offers a variety of encounters and experiences, in a film that may have been less engaging otherwise.

The reveal is always a tense moment in a ghost film, and The Conjuring manages to keep it together. However, the reveal always seems like a needless element, as the presence of the ghost is enough to create the fear, and putting a face to a ghost is unnecessary. The solid acting of the cast should be noted, along with a well written script with moments of comic relief, but don’t get too comfy, as Wan will pack a punch to those unsuspecting.

The Conjuring stands as the moment when Wan puts it all together, fashioning a terrifically freaky haunted-house movie that respects its audience, even when it’s busy finding new ways to launch them out of their seats. Based on ostensibly true events, the film works as something of a thesis on scary movies, featuring all of the essential elements–a creaky door here, a scary doll there, dark corners, well, everywhere–as well as a command of old-school pacing.

Unlike the majority of in-your-face modern horror, it knows when to hold back, and when to go for absolute broke. Chad and Carey Hayes’s script follows Lorraine and Ed Warren (Vera Farmiga and Patrick Wilson), a pair of married paranormal investigators dealing with the increasing mental toll of their profession. When they take on the case of a haunted Connecticut farmhouse, their misgivings come to a terrifying head. And then some.

Wan gets some fantastic performances from his cast, particularly from the alternately steely and fragile Farmiga, and Taylor, whose inspired work here more than compensates for her appearance in the misguided remake of The Haunting. Together, they make it unnervingly easy to believe in the things in the shadows.

The most impressive element of The Conjuring, though, ultimately proves to be its utter relentlessness, steadily cranking the screws without resorting to easy jump scares to tone down the tension. While always playing fair, it qualifies as one of those rare scary movies that put the viewer through the absolute wringer, without leaving them feeling ill-used at the end. Prepare to jump.