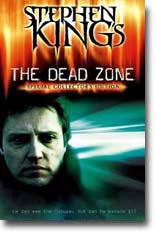 The Dead Zone is based on a novel by Stephen King, directed by David Cronenberg and produced by Debra Hill. Such a trio of horror vets would be expected to come up with an evening of shocks and gore, but The Dead Zone is a surprise.

While it has great atmospheric eeriness and undeniably scary moments, The Dead Zone is at heart a sensitive and thoughtful portrayal of main character Johnny Smith’s (Christopher Walken) dilemma.

Walken, king of the vaguely creepy, plays Smith, a man who awakens from a five-year coma with the very mixed blessing of second sight. At the mere touch of a hand, Smith is unwillingly launched into scenes of past and future terror. Director Cronenberg is said to have fired blanks from a .357 Magnum just out of camera range to keep Walken’s flinching spontaneous.

The Dead Zone wisely takes its time telling the story, and thus allows for some great performances. Walken gives a rich portrayal of the conflicted Smith, and Colleen Dewhurst and Tom Skerritt both do welcome turns in smaller roles. The most fun of all, though, is clearly being had by Martin Sheen, who gives a spirited performance as a complete sleazebag.

Johnny first comes to terms with his power when he agrees to help the police discover the identity of an elusive serial killer walking the streets of Castle Rock (which, for some strange reason, is supposedly located in New Hampshire rather than Maine). This experience only makes him retreat farther into himself, compelling him to move to another town and try to begin a new life within the comfort of his own protective walls.

A traumatic vision concerning one of the students he is tutoring leads him to discover a new aspect of his power, and this discovery comes just in time for him to make a difficult decision as to whether or not to sacrifice his own life in order to prevent a truly cataclysmic event from taking place in the future.