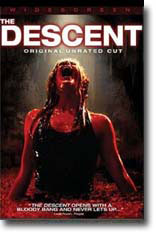 This movie will absolutely terrify you if you are afraid of the dark, claustrophobic, have a fear of being trapped under the earth, and/or have a fear of being trapped in a confined space with creatures that can see you but you can’t see them. If any of these things scare you at all, prepare to be scared out of your wits by this flick.In addition to claustrophobia, bloody mayhem dominates this high-adrenaline horror film.

Six women (including one who lost her husband and child the year before, and one who harbors a bitter secret) spelunk in an unexplored cavern system that turns out to harbor mysterious, predatory creatures. That sums up the story, but this rather simple plot doesn’t begin to describe the riveting, stomach-lurching thrills this movie provides.

The script affords the relatively unknown cast (led by Shauna MacDonald and Natalie Mendoza) just enough room to make their characters distinct and genuine, so that when they’re dropped into utmost peril our empathy is engaged as much as our fear.

The dynamic direction and editing make the cavern a palpable, physical presence, even before the creepy beasts crawl out of their nooks. This is not a movie for everyone; it is extremely gruesome and will induce panic attacks in anyone with even a mild fear of closed spaces. But for anyone seeking something smarter, faster, and wrenching, The Descent will draw you into its unsettling ooze.