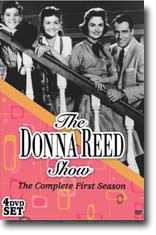 Donna Reed went from a distinguished film career to an even bigger career on Television as she starred in and co-produced The Donna Reed Show. This beloved and hugely successful sitcom premiered over 50 years ago on the ABC network and aired from 1958-1966. The series was one of several family-based shows that literally helped shaped the landscape of reality in America – rather than the other way ’round.The adventures of the Stone family were similar to what those other TV families had to contend with – measles, girlfriends and boyfriends, school problems, little white lies, and so on, compounded by the fact that Dr. Alex was always running off at odd hours to attend his patients. Like those other shows, it had a wholesome quality that endeared it to audiences.

But, the ground-breaking difference between this show and all of the others was its focus: In this series, it was the Mom who knew best. This was the first show of its kind where the Mom was the lead character. And what a Mom! Reed was – and remains – in a class by herself. When this show originally aired, Reed became an influential role model to women – as mother, wife and professional.

Despite all of these shows utter lack of racial and religious diversity and conservative depiction of conformity at all costs, I still love them all. Reed was effervescent without being mechanical. She was sweet, funny and forgiving – everything a child could ever want in a Mom. In addition, her relationship with her “husband,” played by the brilliant Carl Betz, had just a hint of real sexuality that was blatantly missing in the other shows.