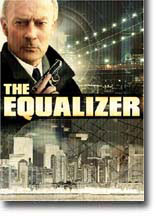 Golden Globe winner Edward Woodward stars as private detective Robert McCall, a sophisticated former government agent atoning for the sins of his past by righting the wrongs of a flawed legal system in the groundbreaking hit suspense series The Equalizer.

Follow this intense anti-hero as he protects innocent people who feel they have nowhere else to turn.Following the clues each step of the way are some of Hollywood’s hottest guest stars, including Luis Guzman, Bradley Whitford, Melissa Joan Hart, and Tony Shalhoub.

Nominated for seven Primetime Emmy Awards and two Golden Globes, The Equalizer is a provocative, action-packed murder-mystery series you won’t want to miss.In The Equalizer, McCall is more than a private detective – he’s man with a lot of contacts who is available for hire if you have a problem that you don’t know how to solve. His no-nonsense attitude, compassion, and experience with dealing with a wide variety of situations makes him a powerful and useful detective.

McCall is a tough-as-nails, no-BS private eye who went into business for himself after leaving the shadowy agency he once worked for. McCall works on behalf of those whose problems the police cannot – or will not – get involved in. His card reads, ‘Got a problem? Odds against you? Need help? Call – The Equalizer.