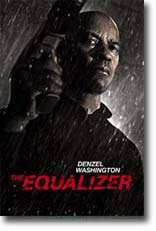 Many will recognize The Equalizer from the cult favorite 1980s TV series led by Ed Woodward, but they’ll see few similarities in the bleak and bloody version directed by Antoine Fuqua. Denzel Washington plays Robert McCall, a genial, helpful stock guy at a Home Depot-type store.

This being The Equalizer, we know that no guy can be quite as happy as McCall seems to be. His barely-furnished home reeks of loneliness, and unable to sleep McCall frequents the same diner each morning at 2am.

At the diner, he meticulously arranges the condiments, reads his book, and converses with Elena (Chloe Grace Moretz), the headstrong yet troubled prostitute apparently using the place as her base of operations. Their conversations are friendly, but distant. She has hopes of something more out of life and he’s eager to encourage her out of the business.

When a bunch of Russian goons beat her up, sending her to the hospital, McCall does what any average Home Depot employee would do, which is systematically destroy her attackers with a lethal flurry of violence. It’s not just that he wipes out four heavily-armed goons all by himself; it’s how he does it. Coldly, calmly assessing the situation beforehand, McCall’s impulses kick into action. So what if he’s a bit slower than he was back in the day (yes, he sets his stopwatch to clock everything), this is McCall in his natural element; not stacking plywood.

This is Denzel in full Man on Fire-mode; confident, brooding, a lean mean murdering machine who makes killing look smooth and easy. His slick demeanor is matched by the bottled ferocity of Marton Csokas, who plays Teddy, a psychotic Russian fixer sent in to discover who has disrupted the mob’s operations. What McCall doesn’t know is that his moment of vengeance has attracted the attention of some people in very high places, and they want him dead.

What ensues isn’t really a game of cat and mouse as it is cat vs. cat. McCall and Teddy are pretty brazen and upfront about what they intend to do to one another, and the body count skyrockets before the inevitable showdown. That McCall has a nemesis worthy of being feared is a credit to screenwriter Richard Wenk, who along with Fuqua’s unsubtle direction creates a film that glorifies its violent excesses. Fuqua loves tough-guy movies like this and is well-suited to the task.

Visual inventiveness has never been his specialty and The Equalizer doesn’t demand it from him. All you need to know about Wenk is that he also wrote The Expendables and 16 Blocks. There’s not a lot of nuance to be found in the story itself, but Denzel adds what layers he can to McCall’s evolution into a street vigilante. He’s a man who has always prided himself on righting wrongs, but a promise to never resort to killing again has him torn and seeking the help of old CIA friends (Melissa Leo and Bill Paxton in minor cameos) before embarking on a dark path.