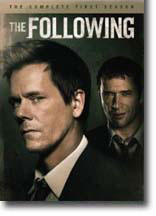 In what is undoubtedly one of the most violent and graphic series ever broadcasted on television, Kevin Bacon plays Ryan Hardy, an ex-FBI agent. When notorious serial killer Joe Carroll (James Purefoy) escapes from death row and embarks on a new killing spree, the FBI calls former agent Hardy, a psychologically scarred veteran who captured Carroll nine years earlier, after Carroll murdered 14 female students on a college campus where he taught literature.

Knowing Carroll better than anyone and close with Carroll’s ex-wife, Claire, Hardy works closely with an FBI team, which includes no-nonsense agent Jennifer Mason and sharp upstart Mike Weston, and soon discovers that Carroll was not only communicating with a network of killers in the outside world, but has much more planned than just a prison escape-and there’s no telling how many additional killers are out there.

As it turns out, getting caught again was all part of Carroll’s plan. While in prison, Carroll had spoken with and gotten to know many different people who admire what he did. The charismatic killer has tricked these people into believing that they need to give their lives meaning by being a part of something special, his resurrection.

Carroll’s getting easily captured by the F.B.I. was nothing more than a signal to his many followers to begin reeking havoc all over the eastern seaboard. The targets are seemingly anyone Carroll ever interacted with and the acts all meant to torment the man who caught him, Ryan Hardy. With no other choice, Hardy agrees to stay on and try to stop whatever was set in motion, before Carroll’s plan can come to fruition.