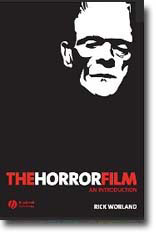 The Horror Film examines the ways in which horror movies have been produced, received, and interpreted by filmmakers, audiences, and critics throughout the medium’s history, from the 1920s to the present. This brief volume offers a broad, historical introduction to cinematic horror, outlining and investigating important issues in the production, consumption, and cultural interpretation of the genre.

Combining historical narrative with close readings of several significant horror films – including Frankenstein, Cat People, Invasion of the Body Snatchers, The Texas Chain Saw Massacre, Halloween, and Bram Stoker’s Dracula – The Horror Film will be the definitive read for any movie-goer who thrills to a great scare. Worland writes in a scholarly but not overly pedantic style, and he is concise and insightful.

This book gives fans and non-fans a comprehensive study of the horror genre: its roots in myth and folktale; its birth in 19th century gross-out theater; how viewers and critics have reacted to it over the years; how it connects with other genres; and how each wave reflects its time while still being part of the whole. After this the author chooses several films and examines them one by one to illustrate these points.