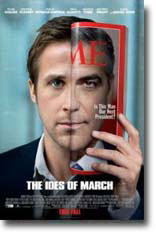 Director-star George Clooney’s The Ides of March is the perfect film to mirror our time, when the approval rating of the United States Congress is at an all-time low and the divisions between the two major parties and their constituents are wider than ever.

Everyone will have some kind of nit to pick with this rather self-serious film. Right-wingers won’t like the fact that the central politician (Clooney’s Governor Mike Morris of Pennsylvania, who’s running for president) is a liberal Democrat who advocates raising taxes on the rich, supports a woman’s right to choose, and may be an atheist (“My religion is the Constitution.”).

The notion is that even among the most seemingly high-minded, the desire for victory and the behind-the-scenes maneuverings and compromises made to achieve it easily trump quaint notions like loyalty and integrity, and secrets are like bullets to be fired at close range, where they can do the most damage.

Smart people make mistakes too, and when Stephen meets semi-publicly with Duffy, who tries to lure the young man over to his side, he opens a can of worms with a stink that leads to some very dark places; nor does his dalliance with a young campaign volunteer (Evan Rachel Wood) turn out to be a great idea, to say the least.

With Marisa Tomei (as a reporter) and Jeffrey Wright (as an Ohio senator whose endorsement may decide the race) also along for the ride, this is one of the best-cast movies in recent memory, and they’re all excellent–especially the ever-reliable Giamatti and Hoffman, whose old political vets have some wonderfully juicy scenes. The dialogue is literate and sharp; the story’s twists and turns are, for the most part, surprising enough to keep you in your seat. Best of all, it’s another chance to shake our fists at the hubris and cynicism of the people who’re supposed to be representing our best interests.