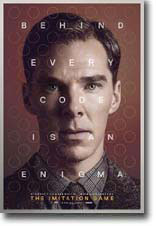 The film opens in 1941 as England and Germany have declared war against each other. The Brits are getting their butts beat as the rest of Europe has already fallen to Hitler and the Nazis. If England can somehow decode the infamous German Enigma machine, perhaps the war can be turned.

Alan Turing (Cumberbatch), a brilliant mathematician, is assigned to help with the decoding process. Socially inept, he has a hard time working with his small cadre of code breakers and they are having no success. Kiera Knightly plays, brilliant in her own right, Joan Clarke, who helps Turing, outside the all-boys group.

While great friends and accomplished collaborators, they don’t become romantic for reasons that become obvious during the film. Turing’s focus is on the building and development of the machine that will provide a mechanical process of encryption that is faster than any group of humans can process given the time constraints. The Nazis change the encoding every day.

Backed by a cast that includes Matthew Goode, Rory Kinnear, Mark Strong, Charles Dance and others, the film moves quickly and is authentic in set design, down to the smallest detail. A relatively unknown Norwegian director, Morten Tyldum has managed to guide this excellent cast through a story that would seem tedious at best, yet does it with suspense and conviction.

As many films do these days, a backstory finds its way into the film in a series of flashbacks. This includes Turing’s days at school and close friendship with a boy named Christopher (Jack Bannon) who eventually becomes the name of the Turing computer. A brilliant film that brings to light an unimaginable injustice to one of the great heroes of World War II.