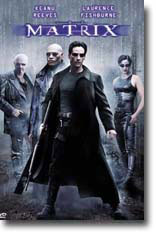 Set in the not too distant future in an insipid, characterless city, there is a young man named Neo (Keanu Reeves). A software techie by day and a computer hacker by night, he sits alone at home by his monitor, waiting for a sign, a signal from what or whom he doesn’t know until one night, a mysterious woman named Trinity (Carrie-Anne Moss) seeks him out and introduces him to that faceless character he has been waiting for: Morpheus (Laurence Fishburne).

A messiah of sorts, Morpheus presents Neo with the truth about his world by shedding light on the dark secrets that have troubled him for so long. Ultimately, Morpheus illustrates to Neo what the Matrix is–a reality beyond reality that controls all of their lives, in a way that Neo can barely comprehend.

Neo thus embarks on an adventure that is both terrifying and enthralling. Pitted against an enemy that transcends human concepts of evil, Morpheus and his team must train Neo to believe that he is the chosen champion of their fight.

With mind-boggling, technically innovative special effects and a thought-provoking script that owes a debt of inspiration to the legacy of cyberpunk fiction, this is much more than an out-and-out action yarn. It is a thinking man’s journey into the realm of futuristic fantasy, a dreamscape full of eye candy that will satisfy sci-fi, kung fu, action, and adventure fans alike.

Although the film is headlined by Reeves and Fishburne (who both turn in fine performances) much of the fun and excitement should be attributed to Moss, who flawlessly mixes vulnerability with immense strength, making other contemporary female heroines look timid by comparison. And if we were going to cast a vote for most dastardly movie villain of 1999, it would have to go to Hugo Weaving, who plays the feckless, psychotic Agent Smith with panache and edginess.