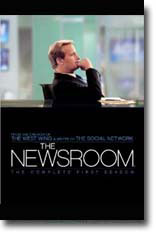 The Newsroom is set in a sprawling simulacrum of the nerve center for a fictional 24-hour cable news network, with only a few segues into the boardrooms, bars, and apartments. The prime-time anchor is Will McAvoy, a vaguely Republican veteran reporter whose crisis of faith in the media and dedication to the fundamentals of journalism causes a meltdown in the premiere episode.Before he knows it, he’s launched into a public diatribe about how America isn’t number one, an event that ultimately drives him to form a new path for his show. Helping him craft a purer angle that’s poised to cut through the noise, mundanity, and ennui in TV news is a new production team headed by producer MacKenzie McHale. She’s an ex-lover who jilted Will, but who also happens to be a firebrand of passion, integrity, and battle-scarred honor.

Jeff Daniels and Emily Mortimer as Will and MacKenzie carry much of the weight with their inherently personal skirmishes (hard feelings linger) and the speechifying that makes up most of the dialogue, usually dialed up to 10 in speed and volume. Will’s arrogance is slightly tempered by MacKenzie’s uprightness, but both of them represent clear archetypes in Sorkin’s quest to carry his message through the medium. MacKenzie says her imperative is “speaking truth to stupid,” which pretty well sums up Sorkin’s attitude about the show’s mission as well as his intention for his audience.

The stridency flows from the top down, but the large cast includes plenty of other mouthpieces for the editorializing. All the politics and realistic newsiness is countered by the very public personal lives of the newsroom staff. Thomas Sadoski and John Gallagher Jr. play pit-bull producers with disdain for each other and a mutual attraction to Maggie (Alison Pill), an associate producer who plays ditzy and quick-witted at the same time.

Dev Patel is a quietly likable presence on the research desk and Olivia Munn plays an on-air personality with multiple advanced degrees in economics, but a remarkable deficit in social skills. In the executive suite above them all is news director Charlie Skinner, brought to crafty, curmudgeonly, and authoritative life by Sam Waterston.

The Newsroom has caused as much conversation about creative and cultural tunnel vision as the HBO series’ creator sparks himself. Aaron Sorkin, who wields a sort of totalitarian imprimatur that marks everything he does, is the subject of much adoration and derision, both of which have been heaped on a show with a distinctive voice that can be as long-winded, blustery, and full of idealistic intellect as most of its characters.