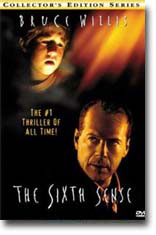 “I see dead people,” whispers little Cole Sear (Haley Joel Osment), scared to affirm what is to him now a daily occurrence. This peaked 9-year old, already hypersensitive to begin with, is now being haunted by seemingly malevolent spirits. Child psychologist Malcolm Crowe (Bruce Willis) is trying to find out what’s triggering Cole’s visions, but what appears to be a psychological manifestation turns out to be frighteningly real.

It might be enough to scare off a lesser man, but for Malcolm it’s personal–several months before, he was accosted and shot by an unhinged patient, who then turned the gun on himself. Since then, Malcolm has been in turmoil–he and his wife (Olivia Williams) are barely speaking, and his life has taken an aimless turn. Having failed his loved ones and himself, he’s not about to give up on Cole.

This feature film by M. Night Shyamalan sets itself up as a thriller, poised on the brink of delivering monstrous scares, but gradually evolves into more of a psychological drama with supernatural undertones. Many critics faulted the film for being mawkish and New Age-y, but no matter how you slice it, this is one mightily effective piece of filmmaking.

The bare bones of the story are basic enough, but the moody atmosphere created by Shyamalan and cinematographer Tak Fujimoto made this one of the creepiest pictures of 1999, forsaking excessive gore for a sinisterly simple feeling of chilly otherworldliness.

Willis is in his strong, silent type mode here, and gives the film wholly over to Osment, whose crumpled face and big eyes convey a child too wise for his years; his scenes with his mother (Toni Collette) are small, heartbreaking marvels.

Even if you figure out the film’s surprise ending, it packs an amazingly emotional wallop when it comes, and will have you racing to watch the movie again with a new perspective. You may be able to shake off the sentimentality of The Sixth Sense, but its craftsmanship and atmosphere will stay with you for days.